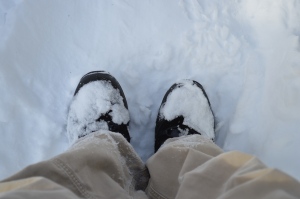 I just took the dog out, and discovered that it is snowing!  Is it really that time of year already?  I still have some leaves to rake.  I guess I’ll have to put the rake away and get the shovel out.

Earlier today, I was reviewing recent decisions from the Appellate Division, Fourth Department, and I came across a case that I thought would be the good subject for a post coinciding with the first snowfall.  I just didn’t think I’d be writing this post today!

The case of Glover v. Botsford, 108 A.D.3d 1182 (4th Dep’t 2013), was brought by a woman seeking damages for injuries she sustained when she slipped and fell on snow or ice on the sidewalk in front of a store owned by one of the defendants and operated by another within the City of Rochester.  The plaintiff alleged that the defendants were negligent because they either created the dangerous condition outside of their store or failed to remedy the condition despite actual or constructive notice of it.  Following discovery, the defendants moved for summary judgment, seeking dismissal of the complaint.  The defendants alleged that they had no duty to remove the snow and ice from the sidewalk because there was a storm in progress at the time of the accident.  However, Justice Polito denied the motion, having determined that there was an issue of fact as to whether the defendants “properly maintained the dangerous, slippery condition by removing the snow, but not salting or removing the ice, as alleged.”

The Appellate Division reversed, based primarily on the affidavit of defendants’ expert meteorologist, and the weather reports upon which that expert relied.  According to the court, this evidence established as a matter of law that there was a storm in progress at the time of the accident.

In opposition to the motion, plaintiff relied exclusively on an affirmation from her attorney, “who asserted, based on an inaccurate reading of the weather reports submitted by defendant that it was not clear whether it had been snowing at the time of the accident.”  Parenthetically, I note that earlier today I read a post on the American Bar Association website, discussing a case by U.S. Court of Appeals Judge Richard Posner, who heavily criticized attorneys for being “afraid of math” and the sciences, and one wonders if this case provides further evidence in support of Judge Posner’s argument?

In any event, the Fourth Department noted that:

Even assuming, arguendo, that it was not snowing heavily at the time of the accident, we note that the ‘storm in progress doctrine is not limited to situations where blizzard conditions exist; it also applies in situations where there is some type of less severe, yet still inclement, winter weather.’

The court also noted that the plaintiff failed to establish that there was any sort of “lull” or “break” in the storm such that the defendants would have had a reasonable amount of time to abate the slippery conditions.

The court also held that the plaintiff failed to raise an issue of fact as to whether the defendants created the dangerous condition or whether their snow removal efforts made the condition worse.  The court noted both that:

Cases like this can be challenging, and not every accident is the result of someone else’s negligence.  However, if you or a loved one are seriously injured and have questions about whether or not a claim exists, feel free to contact me.  Since its founding in 1979, our firm has represented many clients who were seriously injured by the negligence or wrongful conduct of others.  We would be happy to help you.